Following on from my recent reflection, in which I considered the possibility of decorating St Francis of Assisi as the Patron Saint of Detached youth work ( see http://wp.me/p2Az40-KD if you understandably missed it in the pre-Christmas festivities) , I was reflecting on one of the phrases that Richard Rohr used to describe St Francis and his way:

Franciscanism is truly a Sidewalk Spirituality for the street of the world (Rohr, 2014;4)

In the remainder of the book Eager to Love, Richard Rohr describes the life and considerable impact of St Francis, and how the franciscan movement derived from St Francis himself. As someone who has spent alot of time being a detached youthworker over the last 10 years, even working for a project called ‘The Sidewalk Project’, its seems wholly appropriate to glean some of the principles from St Francis in the honing of a Sidewalk Spirituality.

The Infinite in the Finite

Francis believed that the finite manifests the infinite, and that the physical the doorway to the spititual, then all that is needed is right here and now in the world. Heaven thus includes Earth. Stating that there is no Sacred and Profane, places or moments, there are only sacred and desecrated places, where humanity has caused the desecration.  The mystery of Christ becomes specific, because everything is a revelation of the divine – from rocks to rocket ships, or on the streets, grass to graffiti.

Within this space of seeing God becomes mutuality of the one who sees and what can be seen. The ones who see Christ are those paying the right attention. Francis regarded the dignity of others he was in proximity with, and included also the animals, because he honoured his own dignity as a son of God. As Augustine said: what you seek is what you are (Augustines confessions).

As Francis commended to his followers; ‘we must remain in love’ for, it is only when we are eager to love that we can seen love and goodness in the world around us. The same for peace, hope, and beauty. To remain is not to remove, or to isolate, it is to encounter and to see.

I wonder what this sense of love for others compares with current faith based youthwork practice – thinking specifically of ‘values’ that are often retrieved, such as empowerment, and individual dignity. These are as inherently Christian, as they are professional, yet might any of them matter if there is not ‘love’ than is eagerly sought. On a personal note, I am so aware of the times I have felt that deep compassion, call it love, for young people on the streets, it caused me to take volunteers the extra mile, (literally) or to the next hour, because the conviction was there from feeling compassionate to young people, to want to be in proximity with them. I say this because I also know when i have felt like i was performing values but not that deep compassion or conviction.

As Francis Schaeffer said; “Our conscious relationship with God is enhanced if we treat all the things he has made in the same way he treats them”

This follows on from the previous. In only a sacred and desecrated world, everything is potentially sacred if ‘you allow it to be’ . ‘Our job as humans is to make admiration of others and adoration of God fully conscious and deliberate’ (Rohr, 2014) . There becomes no centre if God is everywhere, and most paramount at times as far from the centres created by religion, in the weakest, in the fugitive, the frog or the freak, it is about looking for God. Its is how to look and be attentive in the searching for God.

Francis began to divert from the Bishops in removing from the dinners and gatherings, instead preferring to stay close to the ‘cracks in everything’ in the day to day social fabric of the proximity of people on the streets. As Rohr suggests ‘not only were we Franciscans not to be prelates in the church, but we should not hobnob there too much. you tend to think like those with whom you party’

Francis emphasised the identification with the suffering of the cross, solidarity with the poor, and with human suffering in general, this is the starting place for his spirituality – not the private introverted search or self help. Francis recognised that Spirituality without service of others was a prelude to ego inflation and delusion. The Franciscan Spirituality recognised the possibility of the divine in the everyday encounter with the other person, in the hard, soft or broken edges of life, and that suffering and tragedy might be the quickest doorways to encountering God, depending on honesty.

It is the kind of Spirituality which allows commonality of suffering to be the human leveller in the travelling on the road. like the two disciples on the road to Emmaus (Luke 24), the Disciples on the boat ( John 21) , Sidewalk spirituality places itself on the road, respects the other, and asks those it encounters to begin to recognise God at work. Starting by being in proximity.

As a result of holding , reflecting on a living in the reality of Christs suffering in everyday life in costly discipleship, the consequence will be to be much more compassionate and patient. ‘A spiritual leader, writes Pope Francis, who lacks compassion, has almost no power to change people, because people intuitively know he or she doesnt represent the divine truth’ (Rohr, 2014) A powerful Christ is also a weak one, and only those who join him there and come out the other side will understand, like Francis and his followers, for they ‘rule’ from the edges and reign from what is no longer the bottom. It is just where God already is.

‘He’s Wild you know’ So those who knew of Aslan described him to the children in CS Lewis Narnia Series. As humans we like order, things not necessarily simple, but ordered, systematic even. We even require or revert to order after Christ himself promised disorder post resurrection. Yet we like faith to be controlled, ordered even in the buildings and be able to locate Spiritual and Sacred in easily definable points. A Sidewalk Spirituality is chaotic, it is improvised, it is disordered. As GK Chesterton put it ‘what Benedict stored (in monastries), Francis scattered’ Francis approach is riskier, led to little discipline, clear direction or proper boundaries. This disorder is both a strength and a weakness, clearly. Gospel freedom is always a risk. There is vulnerability in the risky travelling, a cost to personal order, monetary possessions and security.

The Heart of a Sidewalk Spirituality

‘not to preach at or to people, but just to make the truth beautiful, attractive and warm’

And this can only be done if we are eager to love, and look for God in the world, in proximity with others. We dont take something we take ourselves to find God amongst others in places. Jesus becomes someone ‘to imitate’ and not just to worship. Francis took prayer onto the road and into the activity of life itself. The whole world was his cloister! and the message of love and the medium of its message was the same thing. 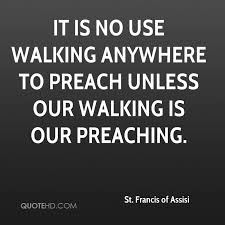 A Sidewalk Spirituality starts with the heart, a heart that takes feet to the places of people, is one that seeks God in all he created, respects those broken and builds community in and amongst them. That’s what Francis did, his communities developed from the roads, from the deemed edges.

What of a Sidewalk Spirituality for faith based detached youthwork – who’s up for this costly pilgrimage?