At the moment, amongst a few other books, I have been reading ‘The Pastor as Public Theologian’, by Kevin Vanhoozer.  Within it, he asks the question: ‘What is the distinctive role of the Pastor’? describing that there is a problem of identity not just for pastors, but all associated with a Christian vocation, such as Youth Ministers, worsh
ip leader and so on.I’ll come to his responses in a bit but it might be worth exploring for a moment, some of the identity and role challenges that a Christian Youthworkers might have.

This is not a new query, the God-fathers of modern theoretical Youthwork, Tony Jeffs and Mark Smith, wrote in 1987, in ‘Youthwork’  that Youth workers not only have to conduct a number of roles, but also, because ‘what a youth worker is’ is such an ill-defined term that they often use these following as a guide or starting point:

And so- this plight to not only understand the role of the youthworker, using more well trodden paths of understanding is not new. A youthworker might need to use another profession to define themselves against, their role might even encapsulate all or some of these others, but in a distinctive way. When Jeffs and Smith were writing this, it was very much to and within what might be considered the statutory youthwork sector. Kerry Young (1999, 2nd ed, 2006) expanded this list somewhat, by reflecting on Youthwork as an art form, in The ‘Art of Youthwork’, suggesting that

The Art of Youthwork is the ability to make and sustain such relationships with young people. In so doing, youth workers themselves develop the knowledge, skills and dispositions to engage with young people in the process of moral philosophising (Young, 2006)

So, adding to the list, of the roles of the youthworker became self-awareness, examination of their own values, critical skills and enlargement of their own capacity for moral philosophising. 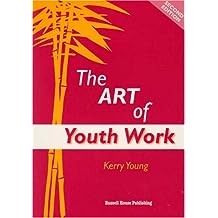 In addition, she also suggests that Youthworkers do not just deliver youthwork, they define it, interpret and develop it. She argues that youthwork is a ‘distinct practice’ – not unlike what Jeffs and Smith were suggesting. So, the question is, for the Christian faith based youthworker – if indeed, this in itself is a distinctive practice – what is it that makes it distinctive?

We’re 30 years (ouch) since Jeffs and Smith’s ‘Youth work’ Book, above – I wonder if there might be other additions that could be made to their list? That youth worker could be defined as. I guess I am waiting for a different professional to say – ‘Im a bit like a youth worker, but less structured’ or ‘if you imagine a youthworker, then I do such and such’ – as if there is a profession that defines itself as one step from youth work – 30, 50 or 70 years into youth work as a distinctive practice – it hasnt captured the public imagination in the way, teacher, nurse, police, social worker or redcoat might have done… (‘hi-de-hi’ has alot to answer for in the latter of these)

Because there hasn’t been new people-orientated professions I cant think of another new profession to add to this list. Though one of the oldest professions could be – The Priest/Vicar/Clergy? In a way this is not that different to what Kerry Young is suggesting. The Youthworker as Clergy is one who has a sense of values, of practices according to values, is someone who would guide to moral decisions, maybe even challenge some too. Now, probably a few of my clergy friends might dispute that Clergy have time to do the kind of pastoral work required for this, but thats not the point im making, for the youth worker, a nod to the role of Clergy might at times be appropriate.

The slightly worrying thing about this, is that if Vanhoozer is to be believed, Clergy might be in the same kind of identity predicament. What he suggests is that there have been a series of images and metaphors that have shaped the understanding of ‘Pastor’ which were created in the social context/culture, been retained and have held the role captive – such as ‘The Pastor as CEO‘ , as ‘psychotherapeutic guru’, as ‘political agitator‘ , (all of these could easily be transferred to youth worker)  – different times in history shape the nature of the role of clergy and models, and so ‘master’ (of theology), ‘Builder’ (of church congregations), ‘Revivalist’ (in the 19th C) , and ‘Manager’ (of programmes, buildings, people- a 20th Century concept) – additions in the 21st Century include ‘Social media mogul’ and ‘community activist’ – and thats before others such as life coach, agent of hope, story teller, midwife (Vanhoozer, 2015, p7-8)

A look to clergy might not be that profitable, in this sense, though there is an element that Clergy are able to shape their practice in a way that defines it, interprets it and develops it, the many examples of books on the role of being a pastor are testiment to this, but this also occurs in the local setting, as clergy encounter people through visiting, groups, wandering around their parish, in schools. There are times when Clergy are as much the youthworker, as vice versa, doing assemblies, being governors, leading groups. The fluidity of role definement remains.

It is not a semantic question to try and define the ‘Christian Faith-based youthworker’ – or at least suggest how this is distinctive as a role and in practice.  Carole Pugh locates ‘youth work with a spiritual content‘ & ‘youth work based on Christian (or other faith) principles focussing on a social action/youth work values‘ approach’ in between the deemed extremes of ‘youth work with no spiritual content’, on one side, and ‘Christian youth work adopting an evangelical approach’ on the other.  (Pugh, 1999) This is similar to that of Danny Brierley in All joined up ( 2003) or Richard Passmore (and I) in ‘Here be Dragons’ , in which we argue that at the heart of Symbiotic youthwork are the core principles of education, equality, participation, empowerment and group work within an understanding of Mission, of improvisation, of ‘valuing culture, traditions and the Bible’ (Passmore, 2013, p60)

So, if Core to ‘Christian faith based Youthwork’ is Youthwork and its values – how might a developed understanding of Christian vocation help. For, as in ‘Here be Dragons’,’ Youthwork and the Mission of God’ (Pete Ward, 1997) and others – one of the key attributes to the Christian youthworker has been a mission prerogative – to ‘meet young people where they’re at’, to ‘be incarnational’ and so, as a result ‘understanding the culture’, and forming practice around Mission has been essential, and has in many cases driven practice; often with Vincent Donovan ringing in our ears. Mission may have taken the youthworker thus far in their thinking, Fresh expressions and emerging church is developing new avenues for youthwork ( see also Here Be Dragons again..), but if Mission becomes swallowed up and synonymised by Evangelism, as the church in ‘Status Anxiety’ might cause it to be, and the Church of Englands national youth person has ‘evangelist’ in their title, (one example amongst many) – then the Christian youthworker, may become even more distinct, but not only that Mission becomes reinterepreted as ‘church grower’ – leaving the Missional christian youthworker without a theological discipline to call home.

Enter, metaphorically, stage left, Kevin Vanhoozer again or at least a paraphrase of him, as I ask ‘What does the Christian faith based worker do, that no other institution can’?

On one hand they might be the only living remnant of youthwork practice soon – much to the thanks of the Conservative government slashing local council funding and with it universal youth service provision – so that might be one distinction- with a youthwork underpinned practice – this might be a future distinction.

But what else – at least from a faith perspective – what might the Christian youth worker be called to be and do?

Now these three things are directed by Vanhoozer, firmly and squarely with the role of Clergy, and in his words the ‘Youth Minister’ – and he has Christian Smiths (2005) research on Youth Ministry in the USA in mind as he makes this point (2015, p116-117, 154) and so this might have more resonance or direction with the ‘Youth Minister’ role in the UK. But what is interesting is that the ‘Christian faith based youth worker’ is probably more used to be doing these three things, as they have an adopted language of youthwork (universal), are involved in conversations that invoke witnessing, are discerners of truth, justice and equality (even if youthwork values drive these) and also value space for conversations.

Vanhoozer, KJ The Pastor as the public Theologian, 2015