Jesus entered the temple courts and drove out all who were buying and selling there. He overturned the tables of the money changers and the benches of those selling doves. 13 “It is written,” he said to them, “‘My house will be called a house of prayer,’[e] but you are making it ‘a den of robbers.’[f]” (Matthew 21: 12-13) 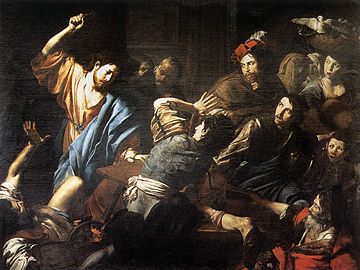 You may or may not realise that this week is Holy week, yesterday was Palm Sunday, the day in the Christian calendar that remembers the moment in the Christian story when Jesus is paraded into Jerusalem, where people wave palm leaves, and he rides in on the Colt, the meagre donkey. In Matthews recollection of the events of the week, and Marks, Jesus head to the temple in Jerusalem, where he is confronted with the scene of the money changers, the stalls and people selling doves. Doves were used as a form of currency, and a bit like the money transfer system of todays foreign travel, commission is charged. It is likely that the temple in this scenario is charging ‘commission’ or a rate for the transfer of money, or doves (which arrive from the poorest families) .

Whenever I have heard this passage preached or talked about it is in the context of whether Jesus had ‘righteous’ anger. What kind of anger did he have, what kind of passion for injustice, what kind of sacred respect should the temple have had. And how its ok to have anger and emotions. But thats just an aside.

However, you would imagine that the money launderers, and chief priests and religious leaders would have been pretty annoyed at what Jesus had done, tearing up their legitimate, if a little unethical, business, causing a disturbance… but actually that wasnt what annoyed them, but they were indignant.

14 The blind and the lame came to him at the temple, and he healed them. 15 But when the chief priests and the teachers of the law saw the wonderful things he did and the children shouting in the temple courts, “Hosanna to the Son of David,” they were indignant. (Matthew 21: 14-15)

Indignant in this verse means a combination of grief and anger. The religious leaders were angry about what they were about to lose.  But what was it they were indignant about, was it the tables, the money launderers and confusion. No it was because the next generation were singing his praises, because they followed a new leader, they believed in a new revolution, one that challenged the old practices, the unfair ones.

The next generation being evoked angered the religious leaders about what they might lose. They might lose status, order, power and respect. All neatly wrapped up in the temple and the culture of the temple in the City at that time. But now children (and they must have been under 12) .

Jesus response to the religious leaders is also telling:

Do you hear what these children are saying?” they asked him.

Jesus was so revolutionary that Children worshipping and following were a threat to the establishment.

I was told in large groups in the 1990’s that there will be a generation of young people in the church who would change the world. ‘a dancing generation’ a ‘revivial generation’ all things that were said of a large group of 5-10,000 young people at a worship event. And it is easy to get carried away about these things because 5,000 young people in a room can look alot. But it is only the size of 4 high schools in the UK. How many high schools in the UK are there again…?  My praise and worship didnt threaten anyone. It was done in the wrong place, and was for the wrong cause. Compare singing in church to the child who sings at the end to galvanise the public, the workers and the fight for justice in Les Mis. If anything thats what this might have been like.

However, that is not the point, though its easy to make.

The point is that when children and young people are on board with a revolution, a new paradigm, then the old order is terrified. And whilst the church is seen to be haemorrhaging young people, it is no longer a threat to society and money laundering, or what might be viewed as an early outworking of capatalism. Its the children of the revolution might be of concern. And whilst the outlets for revolution are echo chambered, or where young people are self consumed by their own ‘finding their way’ in life, the radical changing of the world is resigned to others. In a similar way a church injecting a dose of status anxiety hasnt got the energy to turn the children praising into children challenging the status quo, and endorsing it when it happens.

In the politically charged week of Holy week, lets not forget the children who praised a new revolutionary leader, who by doing so challenged the old order, who caught their attention, and who then were left with similar scars as by the end of the week their leader had been tried and crucified. What ever happened to them?  What kind of church might young people want to believe in and praise?  The meeter of needs church? the developer of interest church? or the church that revolutionises society challenging the injustices of status quo in society that they will grow up to be affected by?

When Jesus cleared the temple, dont forget that it was the children whose worship of Jesus that threatened. And highlighted how powerful this new order was and is.

If Easter is nothing else to you other than Chololate eggs and a bank holiday off, then maybe what was told to you about it was too bland, too abstract or too sugar coated. It was about a revolution and striving for freedom and liberation that was a threat from its inception, like Herod killing the two year olds in Bethlehem, to the religious leaders in Jerusalem. Threat was evident. Yet even in the environment of threat and the city and in front of the religious leaders, the children praised and worshipped, and gave their allegiance to a new King that promised their freedom.

(Credit to Peter Hart for some of the thinking in this piece, which he disseminated during a sermon yesterday. )