The church is now doing a ‘thing’ on Mental Health, writes Will van der hart, in this article in Christianity today: https://www.christiantoday.com/article/how.the.church.went.from.hero.to.zero.on.mental.health/111414.htm?internal_source=ct_related_news , saying that since 2006 he and other have been banging on about mental health and young people.

And thats great, that a national event like soul survivor is hosting a seminar on the topic.

And its also as great that a major national evangelistic youth organisation in the UK is currently focussing on ‘diversity’ – no not the winners of britains got talent but actually being serious about diversity. Not inequality, poverty though, just diversity. Not gender, sexuality, trans issues, but diversity, so realistically race. And it is important that it is happening, it is a start.

And its great also that a Grove booklet (which i am yet to get a copy of ) was on the subject of ‘gender aware youth work’ . It is great that this conversation is happening.

ISNT IT EMBARRASSING AS WELL?

Back in 2003, Danny Brierely argued in ‘All Joined up’ that Youth Ministry needed Youth work, because it had a focus on young people as people, it had an ethical view of the world that would put young peoples needs first, and also that its values would help keep some integrity into the practice of youth ministry.  Admittedly this was in a book written and youth ministry doesnt always respond to books written about itself, even ones that soul survivor/yfc and oasis/youthwork the conference support – as they did with this one.

Anti -oppressive practice, inequality, participation, equality of opportunity – all totem poles that flavoured, drove, and maintain youthwork as a distinctive practice. But where was youth ministry then?

The question is what has youth ministry been doing if its only now beginning to realise that there are complex needs and societal barriers/challenges that young people face?  well most of the time it has been mining that culture for methods and tools for relevancy, for trying to assess what generation we’re supposed to be in and talking to, and its has been serving its own institution, that of the church or it organisation.  Young peoples needs have been second fiddle. Ethical practice has been no where. Equality. hmm.

The long departing field of youth work, has been streets ahead with conversations about equality, gender, mental health, resilience, oppression, inclusion. Even the cover pages on some of these books look dated. And they do because one of them is over 25 years old. Neil Thompsons is on a 4th edition. 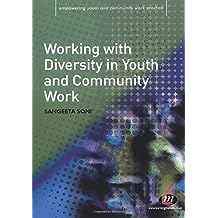 Being aware of and challenging oppression was part even of the work conducted by detached youthworkers in the 1960’s as they became aware of the competing values at work as they wandered the streets, and in conversations with young people. And back to Mental Health, projects in scotland have been developing responses to this since the early 2000’s and youth work/ministry there has done too, especially in YMCA’s and other community based projects.

Its just kind of embarrassing that the view is that the world of evangelical youth ministry is catching up with things that should be part and parcel of its practice. It says something about its culture, about its intentions and willingness to learn from other disciplines that conversations about such matters are only just on its radar. It also reflects a lack of critical thinking within a field to recognise that significant learning, research and work has been conducted by other similar fields and an ignorance not to have engaged with it as core to its practice thus far. Maybe behind the sofa its found a theological view, that isnt liberation theology, to be able to see these things in a different light in 2017, as if youth ministry has been a theology first, action second profession.

maybe also it is realising that there is a gap in which to occupy itself and provide itself with tools to go there, but the youthworkers and pioneers have already been in the gap before and have been shouting about the nature of the world for a while from the margins. Maybe it is opportunist of youth ministry to be given spaces that the youth services once held, and it could be opportune rather than strategic. But i dread to think how a gap year person is supposed to cope if a school asks about helping a young person with complex needs, if theyre there ‘just to tell a group about Jesus’ …

There may well be a shift in youth ministry to think about the complex needs of young poeple – aspects at the core of youth work practice since the 1960’s… It might be an admission that youth ministry has only served the needs of its institutions, not put young people as primary thus far, whilst it might be embarrassingly slow, it is still slightly positive.

And on a real positive note, at least theres plenty of 1p books on amazon if it wanted to critically think about young people and equality.